9 Homemaking Lessons from Nobody by Susan Warner 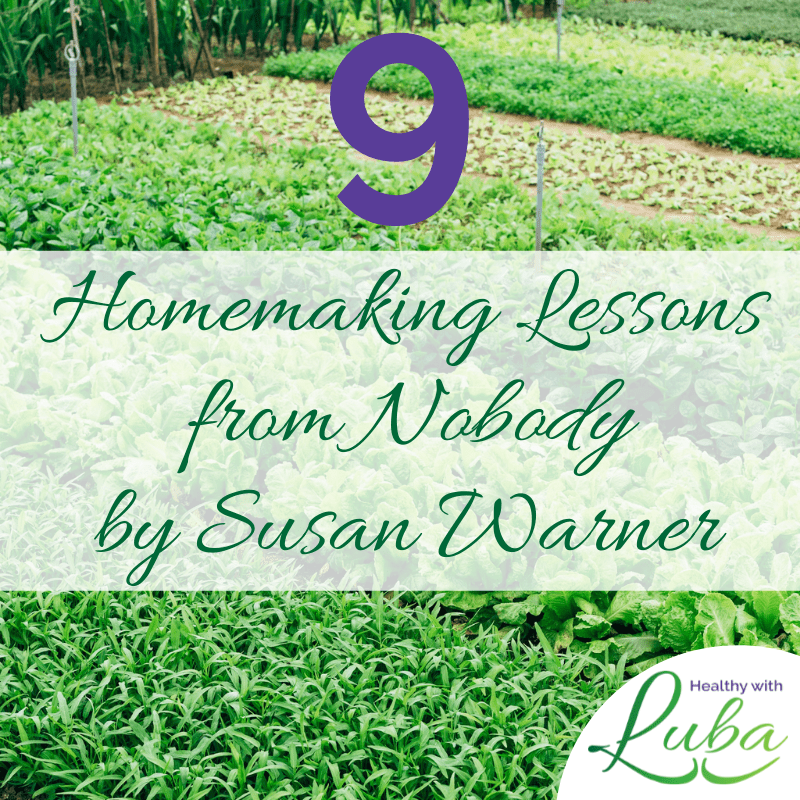 One of the reasons that I love vintage books is that they have so many hidden nuggets of homemaking.  As our world situation becomes less predictable, one thing that we homemakers can do is make our homes lovely, welcoming, and predictable.  I have much to learn in this regard, and reading books written 80 years ago and more gives me much inspiration for my own home.

By making our homes havens, we can block out what is going on in the world, enjoy each other’s company, eat delicious homemade foods, and eagerly anticipate a day at home instead of dreading it.

Susan Warner is an author that I discovered while reading Isabella Alden books.  Miss Warner’s books were a challenge and inspiration to me this summer and fall while I read them.  I trust you will enjoy these lessons as much as I did.

1.  A homemaker must look presentable.

Most occupations have uniforms, or, at least, clothing appropriate to them.   Lois tended the garden yet did not use that as an excuse to look disheveled or sloppy.

Do not imagine an untidy long skirt sweeping the soft soil and transferring large portions of it to the gardener’s ankles; Lois was dressed for her work in a short stuff frock and leggins; and looked as nice when she came out as when she went in . . .

2.  The homemaker knows the pleasure of work.

While some may view work as a curse, the homemaker knows that her work will bring pleasure to her and to others.  Think of the pleasures of a favorite family meal cooked from scratch, of freshly laundered kitchen towels and aprons, and of windows that shone from a recent washing.

“There is always work—” said Lois shyly; “and there are the pleasures that come without being wished for. I mean, without being particularly sought and expected.”

Lois grew up poor and was explaining to a rich gentleman what she would use to fill up her life if she did not fill it up with wishes.

3.  A homemaker knows that if everyone does her duty, no one needs to all the work in a household.

“And you really cannot afford a servant?”

While hiring out work may be a necessity during certain times of life, often the work can be done well by those living in the home.  Lois went on to explain that there were three sisters living with a grandmother, and each did her part.  One cook care of the garden, another sewed the family’s clothing, and the other tended to the cows.

Later on in the book, there was another example of how each daughter did her part to prepare for tea:

Madge set the table briskly, Charity made the tea, Lois cut bread and made toast; and presently talking and eating went on in the harmonious combination which is so agreeable.

4.  A homemaker rises early to accomplish all her tasks.

The sun was up, but not much more, when Lois, with her spade and rake and garden line, opened the little door in the garden fence and shut it after her.

You can read more about the benefits of early rising here.  This lesson is repeated in the book Aunt Hannah and Martha and John by Isabella Alden.

Waking up early is a constant battle for me, yet I know when I do rise early, my day is much more productive!

5.  A homemaker must be self-motivated.

Nobody had ever to remind Lois that it was time for her to attend to this or that thing which it was her charge to do.

Lois realized that she was part of a team and that it was vital for her to do her work.  To take it a step further, she never needed to be reminded of her duties.  She knew what need to be done, and she did it.

6.  A homemaker sees her work as given to her by God.

“God has given me these things to do, and I do them for him.” … “I do every bit of all these things in the way that I think will please and honour him best—as far as I know how.”

While it is easy to become frustrated with the never-ending laundry, dirty dishes, cooking, and many other tasks a homemaker must do often; seeing the tasks as an assignment from God can quickly change our attitudes about the work.

7.  A homemaker educates herself without neglecting her duties.

“Don’t you think, if duties are not neglected, that we ought to educate ourselves all we can, and get all of every sort of good that we can, when we have the opportunity?”

Lois was speaking not of learning more about homemaking but learning foreign languages, art, and music.  While we saw that Lois was an early riser, she rose even earlier to pursue her studies.

… she rose long before daylight came. If anybody had been there to look, Lois might have been seen at four o’clock in the family room, which this winter rather lost its character of kitchen, seated at the table with her lamp and her books …

8.  A homemaker knows how to work quickly and efficiently, with a purpose.

… the washing up of the breakfast dishes was undertaken by Lois and Charity with a despatch and neatness and celerity which the looker-on had never seen equalled.

Another lesson to learn here is that the sisters worked neatly.  Working neatly means that there is not a huge mess to clean up later.  This is another skill I need to learn!

9.  A homemaker is selfless.

… he regretted Lois’s determination; regretted that she thought it necessary; but appreciated the straightforward, unflinching sense of duty which never consulted with ease or selfishness.

When Lois was offered a trip to the city, a trip which would mean leisure and ease in exchange for the hard work she faced at home, she declined.  I’m not saying that we can never take break from work, but Lois knew that she was needed at home, she loved what she did, and she did not make decisions out of selfishness or a sense of luxury.  My takeaway here is that she was not looking for a way out of work.

Which of these lessons was your favorite?  Please share in the comments below.

To be the first to know of new blog posts I publish about health and homemaking (which has much to do with health), just enter your name and email below.  It’s free, and you can subscribe at any time.  I send most newsletters out on Tuesdays.

10 Homemaking Lessons from Aunt Hannah and Martha and John

5 Tips to Beat the Winter Blues

Tired of dealing with health issues?

Join our newsletter list to receive weekly tips on feeling your best!
Your information will *never* be shared or sold to a 3rd party.