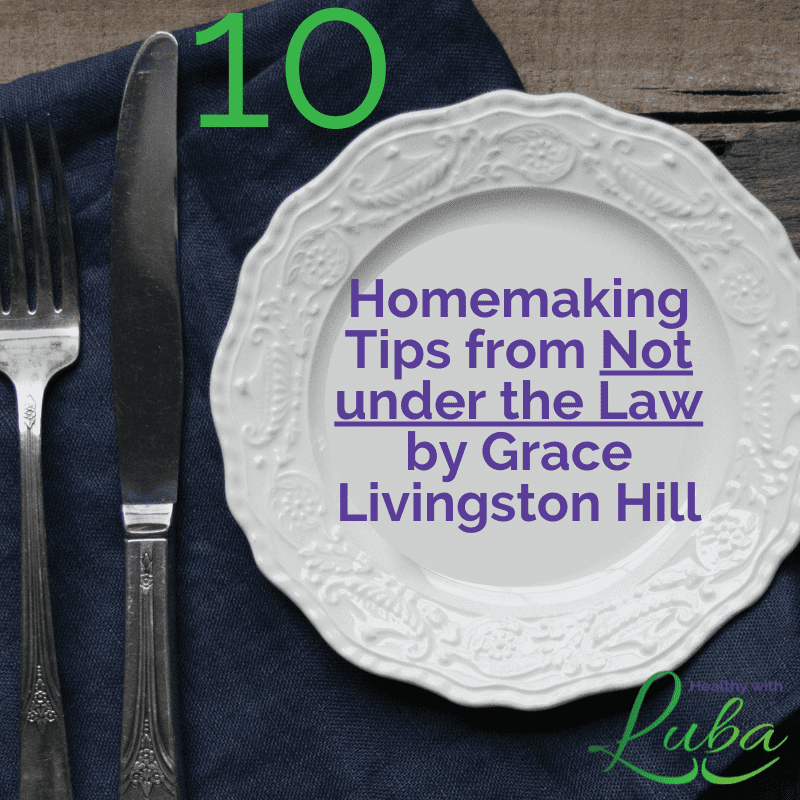 Not under the Law is one of my most favorite books.  It is about a young lady named Joyce who wants to become a school teacher after all her near relatives pass away.  In order to accomplish her goal, she must leave the relatives who want to have her as an unpaid servant.  The story is very fascinating and has many other aspects in it besides homemaking.

1. A homemaker is resourceful.

While Joyce was talking to her future lady lady, the lady’s meat for the next meal had burned.  Joyce had a solution to the “plain” meat that the lady had, and the guests loved it!  She also knew how to make mayonnaise from scratch.  Later, she made her own furniture!

2.  A homemaker can make the best of any place where she lives.

While I will be vague in order not to spoil the story if you had not read it, Joyce found a tiny “house” in which to live.  She turned it into a home by making curtains for it and keeping it clean and tidy.  While some would have thought a tiny place like that could not be counted a home, Joyce proved otherwise.

“Joyce made her bed even thought it was only newspapers.”

3.  A homemaker is wise with her resources.

Because Joyce did not have much time to prepare for her departure from the home where she had lived for years, she did not have much money with her.  Instead of despairing about how little money she had, she was wise in her purchases.  Here are a few of the things she purchased almost immediately:  “thread, needles, a thimble, a paper of pins, enough cheesecloth for window curtains, some blue and white chintz that the woman let her have for fifteen cents a yard because it was all that was left, half a yard of white organdy, and a big blue and white checked apron of coarse gingham that would cover her dress from neck to hem and was only fifty cents.”

4.  A homemaker takes care of her health.

Although her resources were limited, she still ate one meal “out” at restaurant.  Please do remember that restaurants were different than they are now, and the meal was higher quality than would be found at most restaurants today.

“She had been living most economically, getting one meal a day usually at a little restaurant among the stores where the tradespeople ate and good wholesome food could be had at most reasonable rates. This gave her always something hot once a day.”

She made sure she had one substantial meal every day to keep up her strength and health.  She did not attempt to survive on the cheapest foods possible.

5.  A homemaker’s skills can help her earn money while she is training for her dream job.

“… while I don’t think I want to be a cook for life, still I don’t see that it’s going to hurt me to cook a few dinners for other people.”

6.  A homemaker works in a clean and tidy home.

Joyce had a sewing project but make sure to clean and tidy her home before starting on the project.

“When everything was neat and trim, she took out her dress and sat down to sew …”
This is an area on which I need to work on.  It is much more pleasant to be writing a letter, cooking, or organizing in a home that is clean and tidy.  Sometimes I rush into a big project without taking time to clean first, and it just makes working less pleasant.
7.  A homemaker prioritizes her time.
One lady who hired Joyce to cook and serve a meal left Joyce with a kitchen with at least two meals’ worth of dirty dishes and overall quite the disaster.  She told Joyce that her job was to cook the meal (including two cakes), serve it, and leave the kitchen clean.  Oh, and later she came back from her nap and told Joyce to go clean the bathroom.  While Joyce did clean it, she did not give it the ultra-thorough cleaning it needed because it was important to have the meal ready to serve at a certain time, and time was limited.
If you do not read the book for any other reason, I encourage you to read it learn how Joyce handled that overwhelming job.  While she realized she had to wash the dishes first and also to put the dishes on clean shelves rather than on dirty ones, she knew her time was limited and did not stop to clean the refrigerator.
I learned quite a bit just from this part of the story.  Being awful at prioritizing, I was encouraged by reading how Joyce handled her situation.  None of us have unlimited energy or time and always need to choose the best ways to use our time.
8.  A homemaker keeps a good attitude.
This is definitely an area in which I can improve too.
Thankfully, I have never had to clean a kitchen as disastrous as the one Joyce cleaned, but homemaking duties can sometimes be overwhelming.
Although Joyce had enough work for two people when she cooked and served that second meal, this was her attitude:  “Why not make a game of it, something that had to be overcome and won?”
While we may often not be able to choose our circumstances, we can always choose our attitudes.
One interesting aspect of this story was although Joyce did not give up in the midst of seemingly insurmountable troubles, she did not ever agree to work for the woman again.
“One thing she was sure of, she would never work for this woman again if she could help it.  It had been quite another thing to get dinner for Mrs. Bryant, who was delighted with everything she did. This woman treated her as if she were the very dust under her feet.”
9.  A homemaker learns by observation.
Reading homemaking books and books with homemaking tips has been educational for me.  However, another excellent way to learn is by observation.  Maybe we can say that a homemaker watches with the intent to learn?

“Joyce had often watched an old neighbor of theirs in Meadow Brook who was an upholsterer. She knew all the little tricks. She knew how the webbing should be nailed on taut, how the springs must be sewed to the webbing and then tied down level, and the padding of cotton and hair put on the top of that. She was sure she could do it, though she had never tried it. Joyce was not beyond trying anything if necessity drove her to it.”

10.  A homemaker creates a pleasant home to live, even if she is the only one who lives there.

“Now, at last, she had a spot where the tired would be taken out of her when she had worked to the limit of her strength, something to look forward to when she came to her lonely little house at night after a hard day.”

Joyce knew how to make her home a haven.  A peaceful, orderly, clean home can be a refuge from the craziness and demands of every day life.

Have you read Not under the Law?  If so, what was your favorite homemaking tip?

If you found this article via social media, I invite you to subscribe to my newsletter by entering your name and email below.  Social media platforms are not showing my posts to many people.  You will receive one email most weeks (very rarely two), and you can unsubscribe at any time.  🙂  I write about health, wellness, homemaking, and healthy eating.

Save $10 on your first Misfits Market order (groceries delivered to your door) by using this link.
Save $25 off your $100 order with Azure Standard using this link.  This is where we buy flour, grain, and other pantry essentials, along with some frozen foods.
Go here to shop my favorite skincare, personal care, vitamins, and bee products.

10 Homemaking Tips from A Daily Rate

Tired of dealing with health issues?

Join our newsletter list to receive weekly tips on feeling your best!
Your information will *never* be shared or sold to a 3rd party.